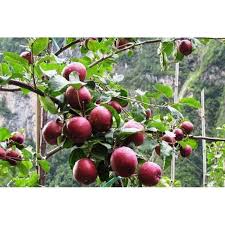 “Apple production has increased due to expansion of area and favorable weather,” he said. “One hundred and fifty thousand plants planted in an area of ​​520 hectares bear fruit.” Apples were sold at the rate of Rs 100 per kg. Of the 1,440 hectares of land in Mustang where apples are cultivated, 520 hectares of trees produce.n the previous year, apple was cultivated in 1,400 hectares but 500 hectares of trees had borne fruit. According to the Agriculture Knowledge Center Mustang, 572 apples have been cultivated in gharpajhong, 594 in baragung Free Zone, 162 in Thasang, 86 in Loghekar damodarkund and 29 hectares in lomanthang.

According to the Center, 898 in Thasang Municipality, 2568 in gharapzhong Municipality and 109 in baragung Free Zone.One hundred and thirty-six, one hundred and twenty metric tons of apples were produced in loghekar damodarkund and 32 metric tons in lomanthang. Due to the expansion of new apple seedlings in the waragung Free Zone, the production has been a bit low. Outbreaks appear to be exacerbated during the San Jose scale and outbreak of scab disease on apple trees in marfa , gharpajhong.

This year, the production has increased due to proper orchard management and disease control by apple farmers in places other than Mustang. Eighty percent of the apples were released during dashain-tihar. Some of the remaining 20 percent of the unsold apples are kept in moist houses.